Candied bacon is a sweet, salty, and savory treat that can either be enjoyed on its own or in baked goods!

When I had the idea for my Whiskey Bacon Cookies, my initial thought was to glaze the bacon with maple syrup. Then I thought, why stop there?

After much trial and error (some errors being more edible than others) I landed on this method and recipe. This bacon is excellent in cookies, brownies, blondies, even banana bread! It’s also fantastic all on its own.

How To Make Candied Bacon

The recipe and process is simple enough with only four ingredients! All you need for this boozy deliciousness is bacon, maple syrup, brown sugar, and whiskey.

This recipe is for 6 slices but the baste will stretch for a few more, or is easily doubled (or tripled!) to make as much candied bacon as you want! When making them for a recipe I like to make one or two extra slices just in case one burns, and when it doesn’t I get rewarded with a treat!

Preheat your oven to 350 degrees Fahrenheit.

Use a basting brush or a spoon to brush each slice of bacon with some of the baste. Put the bacon in your preheated oven and bake for 10 minutes.

Use hot pads to take your bacon out of the oven. Carefully flip each slice over and add more baste to the top of the bacon. Return the bacon to the oven and bake for an additional 10 minutes.

Remove the bacon again, flip and baste once more, and bake for another five minutes.

When your bacon begins to brown at the fat is rendered your bacon is done! On the last baking round keep a close eye on the bacon so it doesn’t burn, as there are many factors that can affect the cooking time.

Use tongs to transfer the Whiskey Maple Bacon to a cooling rack. This will allow the bacon glaze to harden up a bit.

Once the bacon has cooled it can be added to your favorite baked good recipe or enjoyed as a sweet and salty treat on it’s own.

How To Store Whiskey Maple Bacon

If you’re not going to be using the bacon right away, it can be stored in the refrigerator for up to 5 days. When preparing the bacon for storage, use parchment paper or wax paper to separate each piece so they don’t stick together.

You can also freeze it if you’re not going to use the bacon within five days. Seal the separated slices of bacon in an airtight container and keep it in the freezer for up to 4 months. 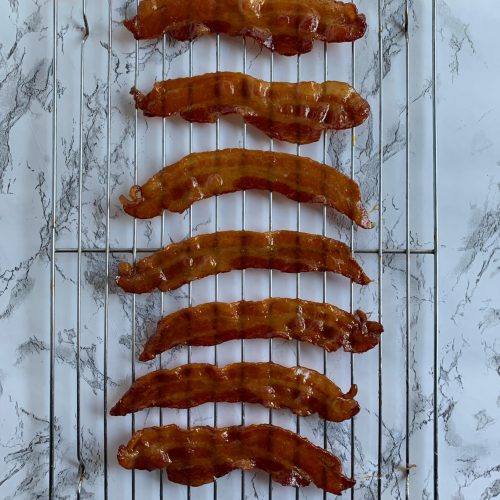 Sign up to hear from me when new recipes are posted!

Searching is in progress